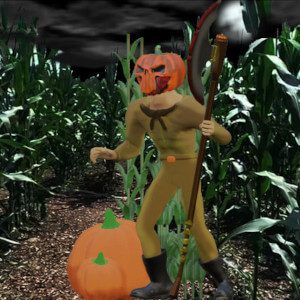 We are huge fans of Halloween at 3DReactions and this holiday season we decided to make our very own Halloween character Pumpkin Jim. This is an original creation by 3DReactions and was crafted vertex by vertex by our own very talented 3D Designer Brendan Reilly. We modeled Pumpkin Jim using one of our favorite tools Blender and textured (3D Designer speak for coloring:) ) him up to make him look appropriately scary. Then we posed him next to his head cutting axe and added a spooky background to add that final Halloween like touch. Poor Jim was a farmer, and somewhere along the way he just lost his head, but fortunately for him he found a suitable pumpkin as a replacement. Read at the bottom of our post to learn the story of Pumpkin Jim. You’ll see him again in the near future.

The Story of Pumkin Jim

Pumpkin Jim originally was a Farmer. They called him Jimmy. On one foggy night, he was out at the barn and was putting away his tools, when he heard a loud screeching howl come from the cornfield outback. In a fuss, he snatched a rake out of a pile of farming equipment to check out what all the commotion was coming from the foggy abyss. Attached to this rake was a rope and attached to the other end of the rope was a large axe hanging on the ceiling. Blindly Jimmy started walking away with the rake and the axe came swinging down and lopped off his head brutally. Astonishingly, like a chicken, the head fell to the ground and quickly faded to black, whereas the rest of ol’ Jim’s body seemed to keep moving… It was just around that time of the year, mid-October when Jim started growing his famous pumpkin patch for the county fair (Jimmy always won the annual “Pumpkin Gigantes Award 1st place”) When Jim’s Body recovered from the axe blow he picked up the axe and grabbed a pumpkin from the pumpkin patch. Then he replaces his head with the pumpkin. and wandered off into the cornfeild. In the search for the source of the shrieking voice and kills anything in his wake. Don’t go wandering off now…